MUSIC FROM THE EARLY YEARS - Da Vinci to Current

This old Gothic drawing is so typical of Gamble Music Production and Archive.  It clearly shows old school art inter-twined with instruments that could be used today. 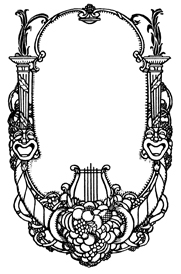 This horn of plenty signifies that music is in its abundance and will never die out. The comdey masks shows that a comedy of errors sometimes happens in life as in music.

This organist is my friend Gene Montgomery.

Leonardo Da Vinci's wacky piano is heard for the first time, after 500 years

Take a bow: The viola organista's strings are played in the same way as a cello. Photo: Tomasz Wiech/AFP
A bizarre instrument combining a piano and cello has finally been played to an audience more than 500 years after it was dreamt up Leonardo da Vinci.
Da Vinci, the Italian Renaissance genius who painted the Mona Lisa, invented the ‘‘viola organista’’ - which looks like a baby grand piano – but never built it, experts say.
The viola organista has now come to life, thanks to a Polish concert pianist with a flair for instrument-making and the patience and passion to interpret da Vinci’s plans.
Full of steel strings and spinning wheels, Slawomir Zubrzycki’s creation is a musical and mechanical work of art.
Advertisement

‘‘This instrument has the characteristics of three we know: the harpsichord, the organ and the viola da gamba,’’ Zubrzycki said as he debuted the instrument at the Academy of Music in the southern Polish city of Krakow.

The instrument’s exterior is painted in a rich midnight blue, adorned with golden swirls painted on the side. The inside of its lid is a deep raspberry inscribed with a Latin quote in gold leaf by 12th-century German nun, mystic and philosopher, Saint Hildegard.
‘‘Holy prophets and scholars immersed in the sea of arts both human and divine, dreamt up a multitude of instruments to delight the soul,’’ it says.
The flat bed of its interior is lined with golden spruce. Sixty-one gleaming steel strings run across it, similar to the inside of a baby grand.
Each is connected to the keyboard, complete with smaller black keys for sharp and flat notes. But unlike a piano, it has no hammered dulcimers. Instead, there are four spinning wheels wrapped in horse-tail hair, like violin bows.
To turn them, Zubrzycki pumps a pedal below the keyboard connected to a crankshaft. As he tinkles the keys, they press the strings down onto the wheels, emitting rich, sonorous tones reminiscent of a cello, an organ and even an accordion.
The effect is a sound that da Vinci dreamt of, but never heard; there are no historical records suggesting he or anyone else of his time built the instrument he designed.
A sketch and notes in da Vinci’s characteristic inverted script is found in his Codex Atlanticus, a 12-volume collection of his manuscripts and designs for everything from weaponry to flight.
‘‘I have no idea what Leonardo da Vinci might think of the instrument I’ve made, but I’d hope he’d be pleased,’’ said Zubrzycki, who spend three years and 5000 hours bringing da Vinci’s creation to life. 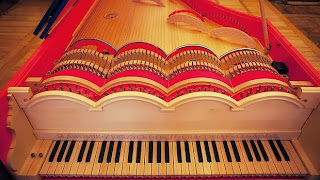 http://www.youtube.com/watch?v=sv3py3Ap8_Y
Email ThisBlogThis!Share to TwitterShare to FacebookShare to Pinterest