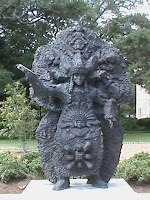 Suggestions from friends and family for Gamble Music Production and Archive are referenced on YouTube, are being completed one step at a time, with the wonderful suggestions given, never harsh criticism, just suggestive of musicologists, family and friends. These blog pages are written by you.
NEW ORLEANS - Aug 2013 (The History of New Orleans Music. The Transistion from the African sounds to classical, then into Jazz and the Blues). My passion speaks:
After speaking to Freddi Williams Evans at the Contemporary Arts Center building in downtown New Orleans (Aug. 5th, 2013),  I'm reminded why I researched  finding the ties of how the sounds of the early African music from Congo Square lead to the sounds of early American classical music and how it was so important to me and how it was such a metamorphic phenominal epic event over the years and how those ties lead into some of the most beautiful classical music not just here in the United States but traveled (as most music does) all over the world. Freddi the author of "Congo Square" (the history of Africian Roots and moreover a brief history of New Orleans music).  It is such an importance to me and equally to my friend Freddi, as she was also drove to write about the early sounds of the Africans with the  passion she received while visiting Africa and then found out about the music of the Congo. On her visit to Africa, she not only learned a great deal about African music but her culture and her roots were founded in the land far away and like myself being adopted from Greece, it was important to be raised as an American but learn of the cultures of Greece (music, cooking, customs, etc). Then she came back and did her piano recital on Bach and Beethoven, which was a culture shock to say the least.
Many people have asked me Scott what kind of instrument do you play, I tell them that learning the knowledge about the origin of Music is more inspiring and fulfilling to me than say Daniel Barenboim playing piano or YoYo Ma playing cello. We all have different passions, mine being, in my own mind, more passionate though as others with their passions.
With this passion of music that I research, there is always one important subject matter that seems to be more important at times than others, what I seek now is the transition from the early African sounds into classical and then into jazz and blues. I believe that my trek may start in New Orleans so therefore I found out about a place called Congo Square. This Square was where Africans, what's your ride to the new world, would be able to go on Sunday and Sunday afternoon and into the night and practice their music and dance even a hundred years later after this began in the early 1700 Africans and then Afro Americans were able to practice the same music and dance even after the days of slavery. This all ties into my research with blog page is that you've already read about finding Afro American music, this research just stems from that and is deemed sometimes more important than the research on African American music. 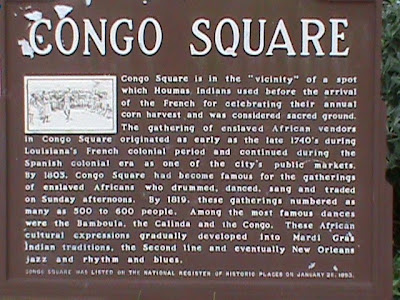 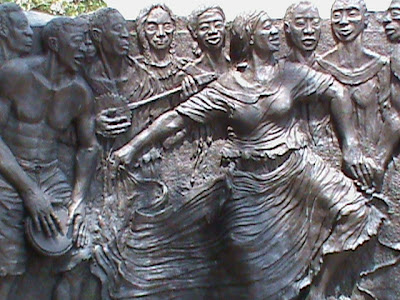 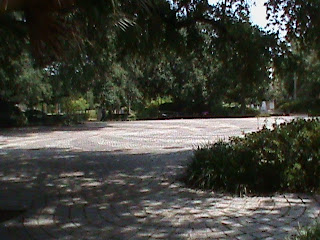 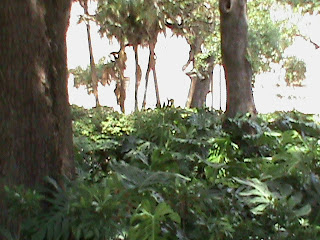 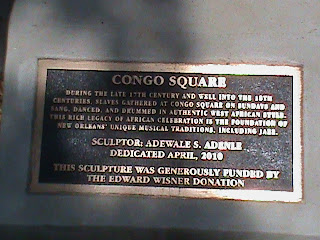 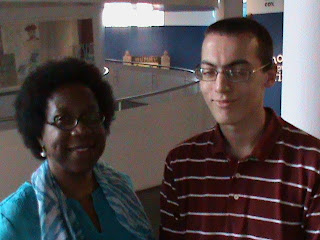 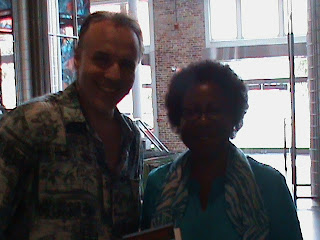 ﻿TOP:  Sign in front of Congo Square in downtown New Orleans with in Louis Armstrong Music Park, explains the significance of Congo Square and how it was used to stage music and dance of early yesteryear for Africans coming into America.

The very top picture shows a African man in full regalia you can see the comparision to that of what is still used in traditional dress during Madi Gras.

As the story goes my son and I had gone to New Orleans in 2011 (my second trip to NO) (but first time seeing the campus of NOBTS (New Orleans Bible Theological Seminary)), and truly seeing the heart of the city.  I had been privileged with taking my son to NOBTS to visit the campus as he was a prospected student to get his masters, he'd already graduated from Auburn University Montgomery with a BS in psychology.  I had no idea the spirits of those blues and jazz performers from years past was calling my name to promote what their art was, is and now does for the city of New Orleans and our United States. "Spirits" (if you believe in that kind of thing) but some kind of aura was expressed in the air and even though I was there for getting my son looked at being a new student, there was something left hanging in the air to draw me closer to the French Quarter and the music I was about to absorb. You see, that afternoon we were there for the campus tour and the almost perfect sleep at the hotel, the next day and the sights, tastes and sounds of the city would bring a new meaning for this particular part of the blog. I'd just started my second season watching TREME (the HBO special feature) and the gut wrenching feeling that I had for the old school performers, some of which have long time passed on, the spirit of the MUSIC still lingered in the air of New Orleans. I knew it was not only the destiny of my son to attend college here but for his Dad to take advantage of these precious years and learn as much as I could about the city, her history and the art that surfaced and was still burried post and pre Katrina.  I can't help but wonder what would have happened if Katrina never happened and people would have continued to build their lives in what some folks would say "their everyday lives" living as usual.  But Katrina did happen and now the rebuilding process begins. This part of the blog continues to build from the early sounds of Congo Square to the music known now as The Blues and Jazz of New Orleans.  But before sounds can be heard one (like the visit to the Black Museum in Tuskegee in 1996) I had to visit the city to better understand the music. That afternoon after the visit of the campus we got ready to dine at Ralph & Kacoo's a very nice 5 star restaurant downtown NO. When we finished there we went to Cafe Du Monde and had coffee and beignets (donuts that are out of this world) a diabetic worse nightmare. Once we finished there we retired for the evening. The next afternoon we toured the city in detail (hitting most of the tourist traps) David showed me most of the city as he'd already been there a few times and knew the history somewhat. We had lunch at Cafe Maspero and then toured more of the city, including but not limited to The Music Factory in which I bought several cd's (to learn the transition of classical to blues and jazz. That night we dined at the nicest restaurant you could attend "Mandina's" founded in 1932, survived Katrina and rebuilt what was torn down. Just in those few days of taking my son to NO, I knew that I was to find not only a brief history of the music that canvassed downtown but the NOBTS library, which the top floor is dedicated only to music. Imagine a floor dedicated JUST TO MUSIC. WOW, my heaven ! God, if I die, I don't need a mansion let me stay in the library of music. WOW. here are a few pictures.

History of the Blues and Jazz (my take)


My heart is content when I go on an endeavor and find hints and clues along the way that shows me the light at the end of the long long tunnel.  From the early sounds of Congo Square to the new classical sounds of Levi Dawson and William Grant Still, I find it overwhelming to see music transitioning from 1600 to 1990, over 400 years of a transition that culminated to what we have today.  I heard the word JAZZ might mean "speed it up" in an African tongue, even though it's proven that no one knows exactly what the word JAZZ or as it was spelled at one time JASS, no one knows what it really means. Blues may have gotten its meaning from the longing lonesome feeling that the songs relate to.