Larry Holder: first friend, then family then composer of the NEW CHRISTMAS SONG FOR NOW and the 21st Century

Most of you know that my son David was married to Lindsay Holder in June of 2020, but I don't think I've told you of how I met Lindsay's parents. I was supposed to go down to NOLA a few days before the wedding, and David's Mom and I was in charge of doing a breakfast for the bridal party and parents one morning, and the bride's parents were to do the same thing but another morning. They were up first. I entered the door and met Rebecca (Lindsay's Mom), a precious woman, and then I met one of the best friends anyone could ever ask for; Larry Holder (Lindsay's Dad) and I started talking about, what else?, Music.

I don't think we gave anyone else a chance to speak us, or we didn't speak much to anyone else, as we seemed to hit it off as friends. I found out a lot about Larry that morning, in that he is modest to say the least. He doesn't brag on his accomplishments, but should. You see, the story you are about to read is a little of his life story and his involvement with the Christmas season. I have had to keep this story to myself (knowing I wanted to release it sooner) but the time frame, you will agree, is special.

Larry is one of five siblings, born in California, then moved to Wyoming, Maryland, Michigan, in North Carolina, before his parents finally settled in west Tennessee. He took piano lessons from his mother and remembers very clearly singing as a family to songs from The Sound of Music; his Mom would play the piano and the other 4 siblings would sing, very much like the Von Trapp family. Each of his siblings took on a different instrument; his older brother the clarinet, his older sister the violin, but Larry chose the guitar, and received his first guitar on his 9th birthday. His first musical idol was Glen Campbell, and he began playing some of Glen’s most popular songs. Ever since getting married and having children, Christmas Eve includes singing Christmas songs with the guitar, lighting the candles of the advent wreath, and reading Bible verses of the Christmas story.

His older sister taught Larry how to finger pick on the guitar, instead of just strumming, something she learned at a summer camp. In the early years, Larry only played guitar at home and special family gatherings. It would not be until in the 9th grade when, while in Memphis, he joined his first band, Stainless Steel, followed by a second band, Mirage, which lasted through his freshman year of college. In college he joined a Christian band, “Rejoyce”, and today he continues to play bass in the worship band at First Baptist Church in Martin, Tennessee. There is a LOT of info left out of this story, but we skip ahead to playing bass in the Ryman Shadows (a bluegrass band), where in addition to learning stand-up bass, he picked up the clawhammer banjo, mandolin, and resonator guitar. He also has hopes of learning to play a recently acquired fiddle.

Larry, by profession, is a computer programmer, and also teaches computer science at The University of Tennessee at Martin, where he has worked for over 3 decades. Larry explains that there are really two things that you leave as a legacy of your life: 1) children to survive you, and 2) what you produce that has lasting value, which in his case are the songs he has written and recorded. He has self-produced two albums on CD, “Til Jesus is All” and “Til Pondering Turns to Praise”. On the second album, his daughter Heather plays the flute on “More Than a Child”. Since 1997, Larry has been sharing his music on the Internet, where it has been found and used all around the world. In particular, "More Than a Child" has been sung and recorded by many individuals as groups, possibly because, like Franz Gruber's "Silent Night", the song is a simple yet genuine expression of the Lord coming to earth.  One day it may well become that earworm song that will enrich anyone's Christmas. I don't mean that the song sounds like "Silent Night", only that its song history is special and unique in its own way. You see, I've held this story until now because it is a Christmas story; plain, simple, short, sweet, yet it shows the chronological stepping of one man growing up writing beautiful music, but then writing a milestone song in "More Than a Child". The song suggests something very simple, and it is. Larry intended for the song to be played with guitar and flute, simple and ear catching. His genius in writing it only comes from that same inspiration (I believe) as God gave Franz Gruber that one night that the organ bellows didn't work and Franz took his guitar to church and introduced our world to a milestone of "Silent Night". Larry would be pleasantly surprised if, some day, “More Than a Child” became as well known as "Silent Night". I believe it should have already become that big, as it is wonderful and a joyous earworm song.

Larry has also collaborated with Rick Founds (Lord I Lift Your Name on High) and other songwriters. The songs that are written have only begun to offer this messed up world a bright light to follow in the sky. He is a wise man, seeking after God's heart, and God has touched his. 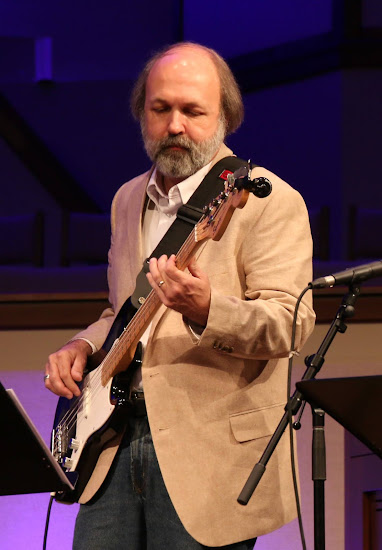