Thanksgiving in New Orleans or anywhere family or love ones are is home. Driving here yesterday was beautiful, hardly any traffic and the music or WWOZ (WWOZ.org) was so "NEW ORLEANS", I kept the station on and didn't turn the knob. There is just something about that sound that makes me come alive and gets me excited about a certain anticipation of overwhelming joy.  As I was out from New Orleans about a hour, the memorial service for Allen Toussaint broadcast from the Orpheum Theater downtown New Orleans, made me sad but sobered me up to the dedication and offering that he made to the city of New Orleans.  His "Southern Nights" was #1 in 1977 by Glen Campbell. The lyrics of "Southern Nights" were inspired by childhood memories Allen Toussaint had of visiting relatives in the Louisiana backwoods, which often entailed storytelling under star-filled nighttime skies. When Campbell heard Toussaint's version, he immediately identified with the lyrics which reminded him of his own youth growing up on an Arkansas farm. In October 1976, Campbell recorded the song with slightly modified lyrics.

So I am waiting for David to get off from Starbucks so we can catch some lunch. I had breakfast there this morning (David bought). I had my chai tea and oatmeal raisin cookie. WOW, now the blues and jazz on the Robert Smith Library (711 Harrison Ave) HD sound system, it just don't get better than that..... So  pictured below is Allen and on behalf of GMP&A we'd like to extend to the family our deepest and heartfelt condolences. He will never be forgotten as his music will last forever. 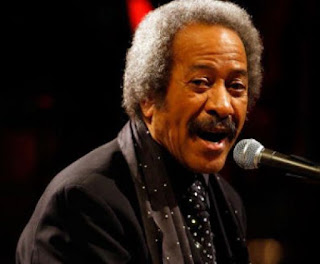 at 9:48 AM No comments:
Email ThisBlogThis!Share to TwitterShare to FacebookShare to Pinterest
Newer Posts Older Posts Home
Subscribe to: Posts (Atom)