George Skaroulis was driving back from Panama City Beach, Florida one week day in about 2004, when he called me to thank me for my call to him several days prior. I'd just listened to Se Ymnumen (pronounced say' new man), I feature it on another page of this blog, I simply fell in love with the song and being a musicologist and knowing what music moves my innermost thoughts and feelings, I fell in love too; the music George Skaroulis. To date he has credited to his discography 16 discs.
1) Passions 2) Sanctuary 3) Imagine 4) The Divinity of Dogs 5) Songs for Sophie 6) Season Transactions 7) Reunion 8) Forever Young 9) Second Nature
10) Athena 11) Return to Homeland 12) Generations 13) Holiday Collection
14) Numinous 15) Homeland 16) Essence (Guided Meditation) 17) Adagio
In the music world that I live in, quickly I gave my friends info on this new to me composer, and soon, it did not take long for them to fall in love with his music as well. WOW, what a great and prolific composer and artist. As one of his promoters in Alabama, I could never think of a better composer that I'd rater have the pleasure of introducing his music.  Se Ymnumen is always going to be one of my favorites, it's what introduced me to a great composer. Enjoy: 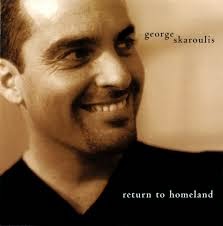 At age five, George began playing the piano sitting on the piano bench next to his mother – a classically trained pianist ­– watching and listening.  One day, he started playing along with her by ear, and he was hooked.  Eventually George performed at talent shows in his elementary schools, and on weekends, his father took him to the piano store at the local mall.  Crowds would gather around to watch, perhaps this was an early indication performing was destined to be in George’s future.
At age ten, his parents encouraged him to take piano lessons, yet after a few weeks George found them too limiting and way too structured.  He never learned to read music, preferring to play by ear and from the heart.

** George told me of some stories of he and his brother and the days he worked as a bus boy and chef at Theos in Panama City. It must run in the family, you see his family (the Patronis' Jimmy and Johnny brothers founded Captain Anderson's in Panama City Beach, Fl). George's father would have him play piano when they'd go anywhere that had a piano. He was proud of George's playing, as he should have because he is really awesome. His albums do not have songs that just "fill in" they are there for a purpose. I will expound later on some stories once I'm cleared to tell them.

As a teenager, George followed the footsteps of his Greek grandfather and had a rewarding career in the restaurant industry.  He studied culinary arts, and eventually spent over 20 years in the restaurant business. Privately, he continued to play piano and eventually compose and create his own songs. After moving to Atlanta, he had an opportunity to record his debut album Homeland in 1996. It was then that George’s independent record label Evzone Music was born.  His soothing style and flowing melodies struck a chord with massage therapists, Yoga instructors, spas and the healing arts.
​
After releasing 4 albums, George decided to put his restaurant career on the back burner, and took a leap of faith to pursue his passion for music full time.  Since then George has recorded 16 albums including Homeland, Numinous, Season Traditions, Athena, Generations, Second Nature, Return to Homeland, Snow, Forever Young, Adagio: the music of Chris Spheeris, Sanctuary,  Reunion , Imagine,  and Songs for Sophie. In addition, George has released two sheet music books of his original compositions.

Even animals have a positive response to George’s music.  When the training and behavior coordinator of the Atlanta Humane Society began using George’s soothing piano music to relax anxious dogs in their kennels overnight, the calming results were remarkable.  George organized several successful fundraisers to benefit the group and was soon named the Humane Society’s official musician in Atlanta.

New, Now, Next:
George’s latest collection of all new intimate piano is the recently released Passions.  Even before it’s official release, the overwhelming response from listeners was quite promising.  Passions is a collection of 19 all new solo piano compositions, and these songs are destined to appear as film soundtracks of the future. One of George’s other passions is photography. George is a talented photographer and the photography page on his website features many of his “passions” including vintage machinery and old pianos as well as his love for the world of food.   He also offers cooking classes for Piedmont Hospital’s Cancer Wellness program in Atlanta.

Currently George is working with a company in Denmark  creating music for a series of videos to promote awareness about  securing safe and clean water for all. In the summer of 2013 he will perform his first concert tour in Korea.  His Passions sheet music book will be available soon, and George will be releasing a guided meditation project in the very near future.
All of George’s music can be found at GeorgeSkaroulis.com as well on iTunes and Amazon.